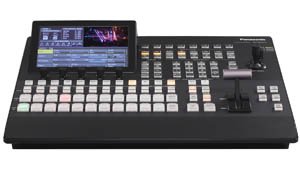 The AV-HS410 supports standard HD/SD multi-format, including 1080/24PsF. System frequency is 59.94 Hz/50 Hz/24 Hz switchable. This makes the system ideal for digital cinema production and worldwide operation. A wide range of optional boards also allows the input and output of analog component and various other signals. (Please see the table below for more details.)

Two P-in-P buses and four Aux buses are provided. Borders and software effects can be applied to the P-in-P buses. In addition to a Cut transition, the bus transition function (P-in-P bus and Aux bus switching effect) also enables a Mix transition (Aux 1 only). Flexible operation is achieved by combining Aux buses and M/E sections.

Two inputs for still (STILL) or moving (CLIP) images can be saved in Video Memory, and selected as bus footage. Moving pictures can be recorded and played with key signals (for a maximum of approximately 20 seconds/600 frames with 59.94i). Moving picture and still files can also be transferred from an SDHC/SD Memory Card or PC by a LAN network.*


Linear, luminance and chroma keying are provided. Chroma keying employs the Primatte algorithm, which is widely used as a plug-in for nonlinear editors. The same excellent Primatte image quality that is used worldwide for movies, TV programs, music videos and commercials is achieved by the AV-HS410&s real time processing. Superior blue-spill processing naturally combines translucent objects, such as thin cloth and glass, with background colors. Extremely fine objects, such as individual strands of hair, are faithfully reproduced. One DSK channel is also provided to add borders, shadows, and other edge effects.

Up to 100 image effects, such as background transition patterns, P-in-P sizes and border widths, can be registered in shot memory for instant retrieval. The AV-HS410&s Effect Dissolve function enables smooth switching from a current image to one of the images or operations registered in the shot memory.

This new function lets you preview the shot memory and event memory content. It allows image effects to be easily confirmed while on-air with this 1 M/E switcher. This is particularly convenient for live operation.

A 178 mm ( 7 inches) color LCD monitor with WVGA (800 x 480) resolution is built into the control panel. It can be switched to a wide variety of display modes, including setting menus, image monitoring and waveform/vectorscope. (See the table below.) It also supports the MultiViewer and Memory Preview functions. AV-HS410 provides comfortable operation eliminating the need to view multiple displays in different locations.

The MultiViewer function lets you split the screen to display PVW, PGM and all source images on a single screen. It enables 4/5/6/9/10/16 split screens. The input signal name, audio level meter and 4:3 marker can also be overlaid onto each screen, and a clock can be displayed. This makes it possible to efficiently operate a multi-channel system with a single monitor.

Features such as a total of 12 crosspoint buttons in each A bus and B bus (for a maximum of 22 with the Shift function) allow direct control with this simple panel layout. Function settings and registrations are made quickly and intuitively with the LCD monitor&s matrix menu and rotary switches. Various functions can also be assigned to eight user buttons for one-touch operation. This level of easy operation supports speed and accuracy in live-relay operation.

Plug-ins allow flexible expansion of software-based functions. A Software Development Kit (SDK) is provided so that third parties or SI enterprises can freely develop the software to add new functions to the AV-HS410. This will enable the system to meet an even wider range of needs, such as controlling the AV-HS410 with an external controller or PC, operating cameras and other devices from the AV-HS410, and outputting status data related to the live switcher or image sources. 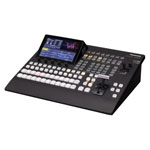 Compact, expandable, multi-format HD/SD video switcher with 9+ inputs (eight HD-SDI, one scaleable HD DVI-D). Four Aux busses are provided to enable versatile production workflow, with mix transitions available on AUX1. Dual PinP (with transition memories), one DSK, and an upstream keyer with 3D flying key and Primatte Chroma key capabilities are also provided. Numerous high-quality 3D and 2D effects are available for transitions for both background and key. All input channels feature a built-in switchable frame synchronizer, while upconverters are available for four channels and 16-axis color correction for the eight standard HD-SD/SDI inputs. The HS410s system frequency is switchable among 60Hz, 50Hz, and 24Hz, enabling international operation and digital cinema style live switching.
Day: £350.00
Week: £1,050.00
We are happy to hire, demonstrate or sell these units. Please call or email for current purchase prices. Our hire rates are shown above, or see here for more options.